Prior to stepping in to lead the FVSU Wildcats in January 2022, Robinson served as a national scout for the HBCU All-Stars, the organization hosting a college basketball showcase highlighting the best HBCU players in the country during Final Four Weekend 2022 in New Orleans. As a leader beyond basketball, during 2021 Robinson served as an Upward youth basketball assistant coach in Georgia and as an assistant coach of little league baseball in Tennessee. 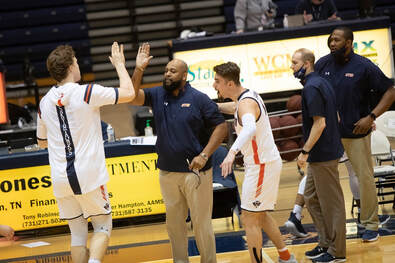 During the 2020-21 basketball season, Robinson served as interim head coach of University of Tennessee at Martin’s Skyhawks following the untimely passing of Coach Anthony Stewart just three weeks before the start of the season. In spite of major roster changes during the COVID-19 pandemic, the UTM Skyhawks swept the season series against Ohio Valley Conference (OVC) rival Southeast Missouri for the first time since the 2008-09 season. UTM defeated the University of Evansville for only the second time in school history and snapped a six-game losing streak to OVC preseason favorite Austin Peay State University.

​Prior to coaching at UTM, Robinson completed five seasons as head coach of the Alcorn State University Braves men's program. Within those five years, Robinson revived a dying program, suffering from APR restrictions, as well as losses on and off the basketball court. Under his leadership, the Braves claimed two second place finishes, a trip to the conference championship game, five straight conference tournament appearances and a 2020 invitation to play in the College Insider.com Postseason Tournament (CIT).
Prior to coaching at KSU, Robinson served as Truett-McConnell University’s (TMU) associate head men’s basketball coach for three years. During his tenure with TMU, he assisted with the turnaround of the team on the court, improving from an eight-win season to a 24-win season in his first year, with just three scholarship athletes.

Robinson holds a Master of Science in Transformative Leadership from Bethune-Cookman University and a Bachelor of Science Degree in Criminal Justice from North Georgia University, where he played for two years, serving as co-captain of the men’s basketball team both seasons. Prior to that, he played two seasons at Kemper Military Junior College in Missouri, while earning his Associate Degree in Liberal Arts.

Robinson and his wife, Leah (Hornbuckle), have a daughter and a son, Tezlyn and Montez, Jr.